I'm thrilled to let you know that Outback Secrets is Out Now on Amazon Au. It may take a while to upload to all Amazon sites, but it is coming. 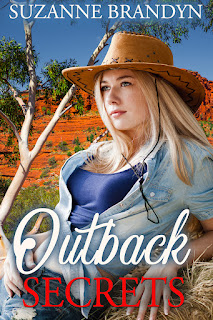 It's spring here in Australia and I'm looking forward to the warmer months and to starting another novel.

I do hope you enjoy the read and it takes you away from your everyday problems, especially surrounding the covid.

The flat red land surrounding Abby hadn’t diminished, and the road ahead held a mesmerising shimmer. The old saying to fry an egg on the bonnet of a vehicle would live up to its expectation, and she wondered if boiling water would be possible.

She had thoughts about changing her clothing during her last stop but with the searing heat and the air conditioner cranked up to the highest setting, she didn’t like her chances of arriving in a dry skirt and white blouse. She’d change as soon as she arrived. The clock on the dashboard reminded her she was late, and it was still a little over an hour’s drive to the cattle station. It wasn’t an ideal start to meet the Kinsleys. She’d underestimated how long the trip would take, especially with all the breaks she needed.

The town of Ironbark drifted into view. It was pleasant to see, with the wide main street stretching ahead, dotted by low-lying shrubs and trees. A single pedestrian jaywalked in front of her, unconcerned, like any car would surely stop, and a tumbleweed rolled down the centre of the road. Ironbark sure had changed during the nineteen years she’d been away.

The Ironbark hotel stood tall and displayed the wide verandas she remembered, along with a new pale blue paint job and intricate latticework. A few motels and stores lined either side of the street, also looking like they had always been there. A picture of a musk stick lolly caught her attention; the sign below read, “The Lolly Shop.” Further along, a cafe called ‘The Black Cow” brought a smile to her face. It boasted a logo saying, “The best coffee this side of the black stump.” She’d heard of the imaginary location, although three towns in Australia also claimed to be the original black stump. When you had so little else going for you, Abby mused, finding anything remarkable to claim could make the difference between a dying country town and one on the map.

Leaving the township behind, she reached the one-hundred-and-ten-kilometre zone, and the land opened up once again. With well over nine hours on the road, it was becoming monotonous. There wasn’t anything to look at except the straight bitumen road and various roadkill, enclosed by barren land.

Over half an hour before the turn-off to Corundin Station, the Noble property moved into view. She pulled to a stop before a timber fence entangled by out-of-control vines. Tall grass dominated the surrounding paddocks, and weeds overtook the driveway. The cattle grid was barely recognisable, smothered by years of neglect.

Distance and pine trees, which seemed much taller these days, obscured the house. Memories of her parents surfaced. It was a shame how everything turned out. In a trance, she climbed from the vehicle and took a few steps towards the gate. Not a branch or leaf moved in the surrounding trees, and the deafening sound of cicadas were the only sounds she could hear.

It’d been a long time since she’d set foot on Noble soil and a sense of regret tugged at her heartstrings. I’ll find out what happened to you, Dad. I know you didn’t take off on purpose. I know that something dreadful took place.

She had to confront the Kinsleys, and it wasn’t going to happen standing here with her ghosts. With a heavy heart, she exhaled her tension and walked back to her vehicle.

Half an hour later, she turned off the main road and travelled for another ten minutes along a dirt road. The surroundings were a stark contrast to what lay beyond the perimeter. The Kinsley place was gigantic. Trees with thick bases, appearing centuries-old, provided shade, and a Jacaranda tree in full bloom softened the area. It was like an exotic oasis. She manoeuvred past rainwater tanks and a tennis court, with several buildings to her right, before pulling up in front of a two-storey home made of stone and timber.

Stone pillars held up a veranda, which appeared to wrap around the entire building, and several dormer windows jutted from the upstairs level. A smile touched her lips when she spotted a joey wandering in the garden. It was difficult to believe such a place existed out here in the middle of nowhere. Deep roots had been planted here, and she suspected had been for generations.

Abby stepped out and stretched the kinks from her body before heading towards the back of the vehicle to extract her clothing. After checking out the area to confirm no one was close by, she quickly slipped off her singlet top and denim shorts. Rushing to get into her black skirt, she’d managed to secure the side zipper and picked up a white blouse when a deep voice broke the silence.

A quick look over her shoulder revealed a tall, confronting man with muscular arms crossed against his chest. Startled, she fought her arms into the sleeves of her blouse and hastened to secure the buttons.

‘Yes.’ She took a deep breath and cleared her parched throat while she inched her toes into a pair of black sandals. ‘I’m Abby O’Brien.’ She tried to keep her voice level. Let him think she didn’t care about being caught semi-naked on the driveway.

‘Meaning.’ The riot of dark curls that fell over the collar of his chambray shirt was a stark contrast to his cutting brown eyes.

She gave him a quizzical look. ‘I’m the new nurse. Can you tell me where Mr Kinsley is?’

‘I’m Mr Kinsley.’ His eyes turned darker as they bore right through her, and a frown marked his tanned forehead. ‘You’re the new… nurse?’

My icon within the world of Outback Romance. If I ever got lost on the property, I'd look for the toothless windmill to mark my way home.